Bankruptcy – Simplified Process and the Role of the Trustee in Bankruptcy

From the commencement of bankruptcy, the appointment of the Official Receiver takes place, who acts as the receiver and manager of the bankrupt’s property.  However, where there are assets of any value or it is considered that a detailed investigation is necessary, a Trustee in Bankruptcy will normally be appointed, whose role is to investigate what assets there are and realise the assets for creditor distribution. The Trustee in Bankruptcy must be a Licensed Insolvency Practitioner.

The 3 Infographics on this page deal with: the appointment of the Trustee in Bankruptcy, Investigations into the Bankrupt’s Assets and the processes involved in Asset Realisations.

The whole process of bankruptcy is governed by strict rules, but each case is different with its own complexities, which means that experienced Trustees in Bankruptcy are needed to ensure the process is completed thoroughly and fairly. The Trustee in Bankruptcy is appointed either: by a meeting of the bankrupt’s creditors, or the Secretary of State, or by the Court. The appointment of a trustee in bankruptcy and the performance of the trustee can have a significant bearing on the outcome of the bankruptcy.

Here at Antony Batty our Licensed Insolvency Practitioners have been appointed as Trustees in Bankruptcy many times. Contact us or call us on 0208 088 0633 for bankruptcy advice. The initial meeting is FREE.

1. The Appointment of the Trustee in Bankruptcy 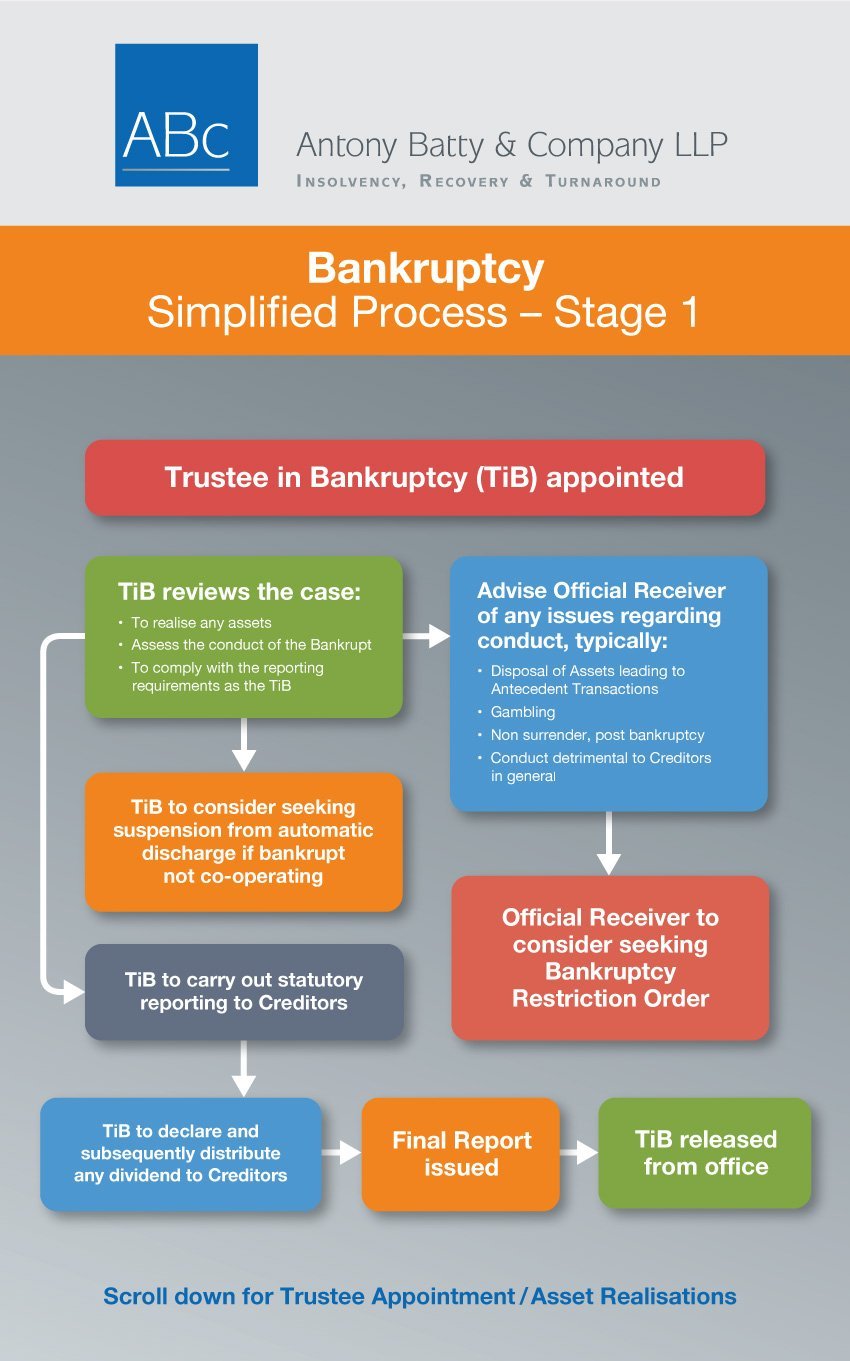 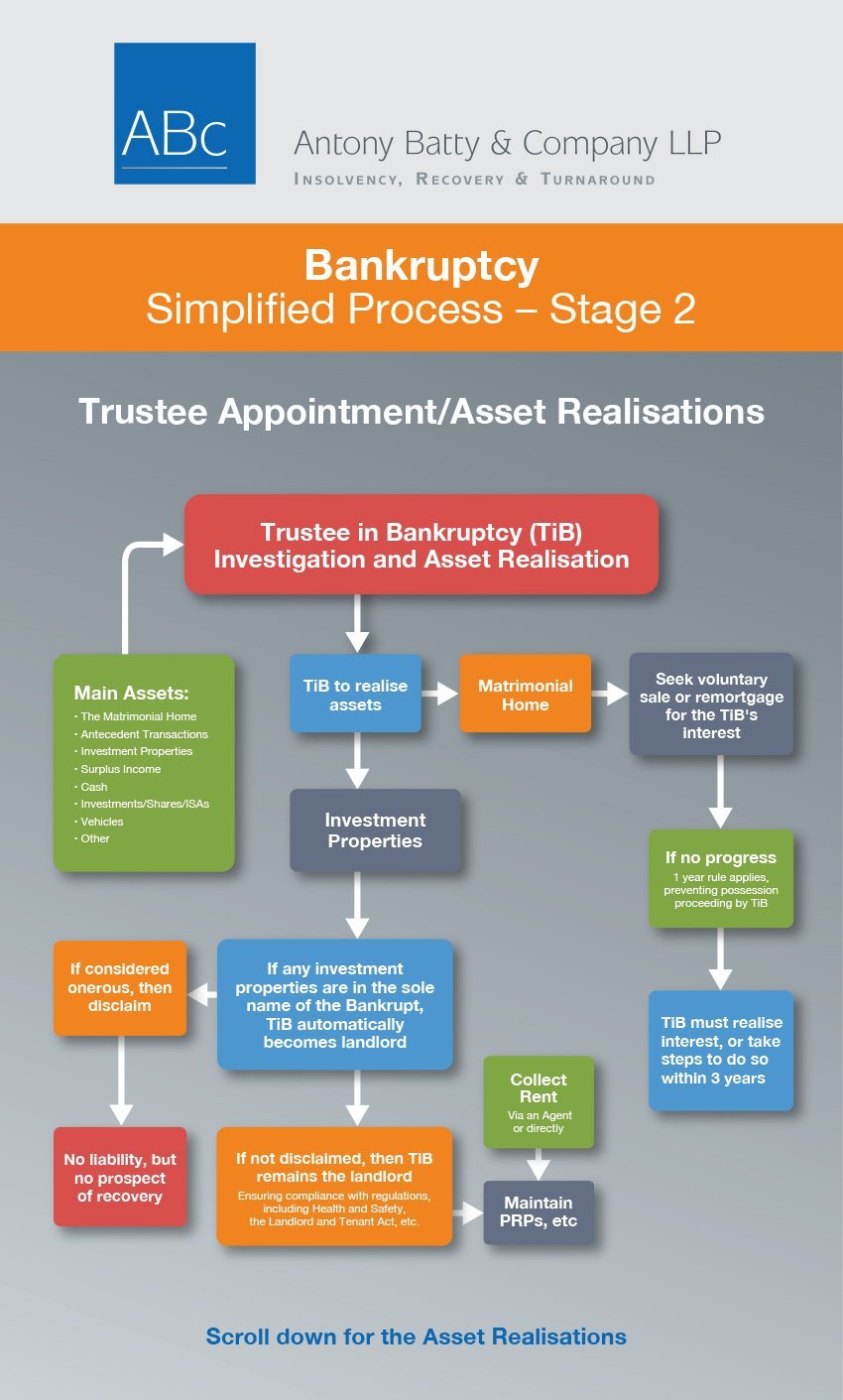 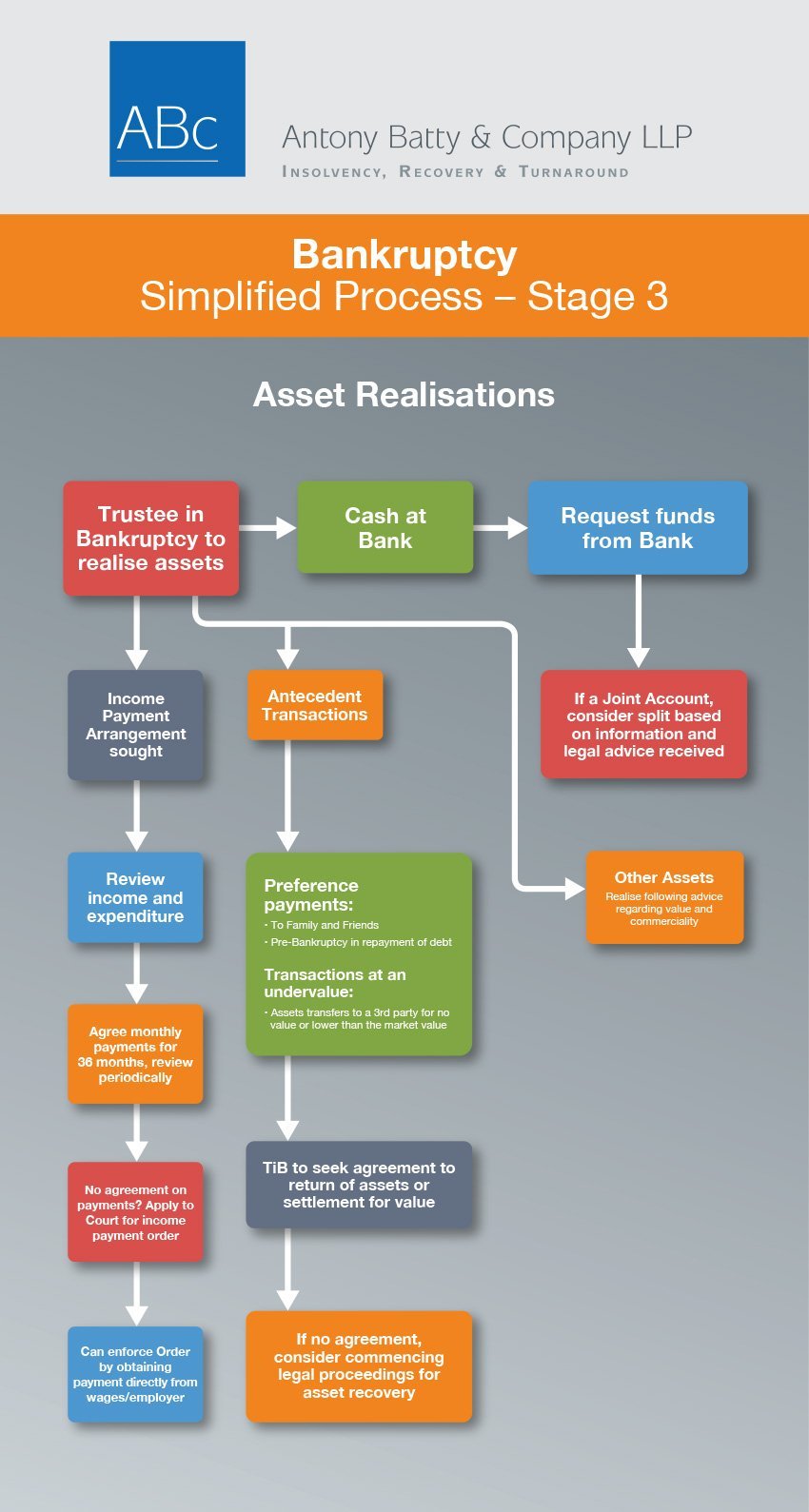 The Trustee in Bankruptcy’s duties and responsibilities

The Trustee in Bankruptcy has several key legal duties:

Can, or Will, the Court Interfere with The Trustee’s Discretion?

The Trustee in Bankruptcy has a number of on-going reporting requirements to make and is subject at all times to the supervision of the creditor’s committee or the Secretary of State if re is no Committee.

It is possible that if either the bankrupt, or the creditors, or both, are dissatisfied with any aspect of the trustee’s conduct during bankruptcy’s process, an application can be made to the Court for the trustee to be replaced. However, the Court would need to be provided with substantial evidence for this to happen.