Our London team of Insolvency Practitioners has put together this simplified ‘Infographic’ that details the main steps in the process of a creditor making a Bankruptcy Petition. Our team has great experience in offering Bankruptcy Advice.

Click here for details of how the bankruptcy process happens once the petition has been issued and the Official Receiver has been appointed. 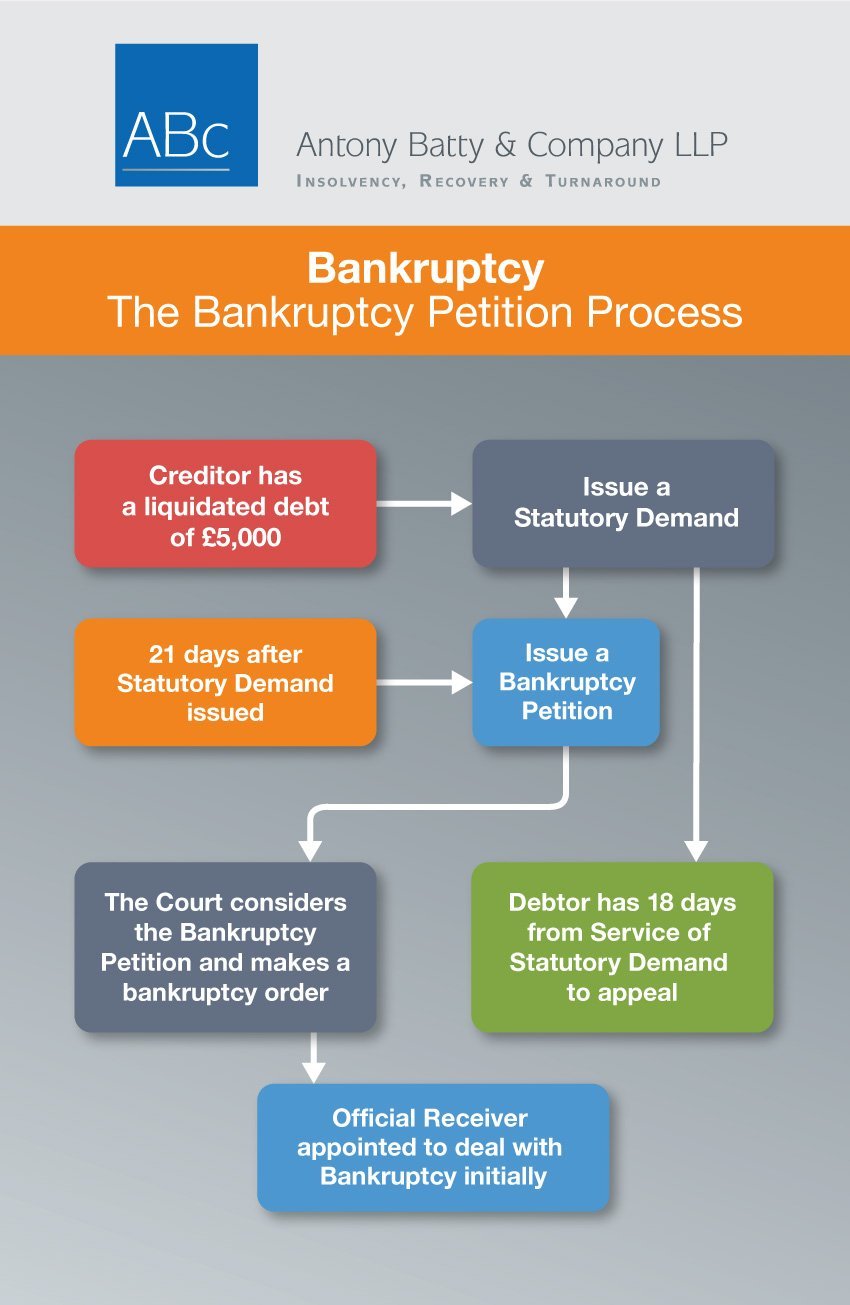 What is a Creditor Petition for Bankruptcy?

A creditor petition for bankruptcy is an application made to the court by a creditor to recover a debt. The application is usually made after several unsuccessful attempts have been made to recover the debt. The main sequence of events is shown in the infographic above.

Importantly, the application is strictly regulated, and requires the applying creditor to complete several steps before the court will consider their application. The current charge for making a bankruptcy petition application (as at May 2019) is £990 for the petition deposit, and court fees of £280.

To make a bankruptcy petition, the debt must be at least £5,000, either to a single creditor or several creditors. The creditors must be able to prove that they have made genuine attempts to recover the debt, and this is usually done by issuing a 21 day statutory demand on the debtor. The debt must be unpaid and unsecured, with the debtor not having applied for the statutory demand to be set aside.

The statutory demand is a formal demand by the creditor for payment of the debt. The debtor then has 21 days from receiving the demand to pay the debt in full, or come to an arrangement to pay in instalments. If this doesn’t happen the creditor has four months in which to make a petition for bankruptcy. The debtor has 18 dales to appeal.

The Issuing of the Bankruptcy Petition

The bankruptcy petition is usually submitted to the County Court that is nearest to the debtor., and a hearing is set for a minimum of 14 days later.

At the hearing, the Court can decide to delay the proceedings, if it decided more evidence is needed, or it can dismiss the proceedings if it considers that the creditor’s behaviour is unreasonable.

However, if the Court supports the petition, then it will make a bankruptcy order.

An Official Receiver is Now Appointed

The Official Receiver is a civil servant in The Insolvency Service and an officer of the court. He (or she) will be notified by the court of the bankruptcy and will then be responsible through his staff for administering the initial stage of the bankruptcy. The Official Receiver takes control of an individual’s assets when a bankruptcy order is made, and also decides whether or not the debtor has sufficient residual income to make monthly payments to creditors via an Income Payments Agreement (IPA).

If you would like more information about creditor petitions for bankruptcy, or just some general bankruptcy advice, our insolvency practitioners can help. We have significant experience in all of the processes of bankruptcy.

Contact us or call us on any of the numbers below for a Free initial consultation.

The Potential Misuse of CBILs, CLBILs and BBLs – an Insolvency Practitioners Perspective.

Freezing orders, Winding up Petitions, Director Disqualification and Criminal Proceedings can all be the result of misuse. But what if you genuinely cannot repay?...
Read More