There are many duties of directors in the UK, enshrined in the Companies Act 2006. This act seeks to impose restrictions and controls on company directors to prevent them from abusing their powers. These duties apply to all directors of all companies, public and private, holding and subsidiary. Of particular importance are the key duties of directors when a company is in financial difficulties and facing insolvency. Such circumstances can lead to poor/wrong decision making by directors, resulting in director disqualification investigations by the Insolvency Service. Taking swift action and advice from insolvency practitioners can help to avoid such investigations.

The infographic below looks at some of the main things that directors should and should not do with particular focus on the period when a company is in financial difficulties and facing insolvency. Directors’ responsibilities increase when a company faces insolvency and are detailed in The Insolvency Act 1986 and the Company Directors Disqualification Act 1986. 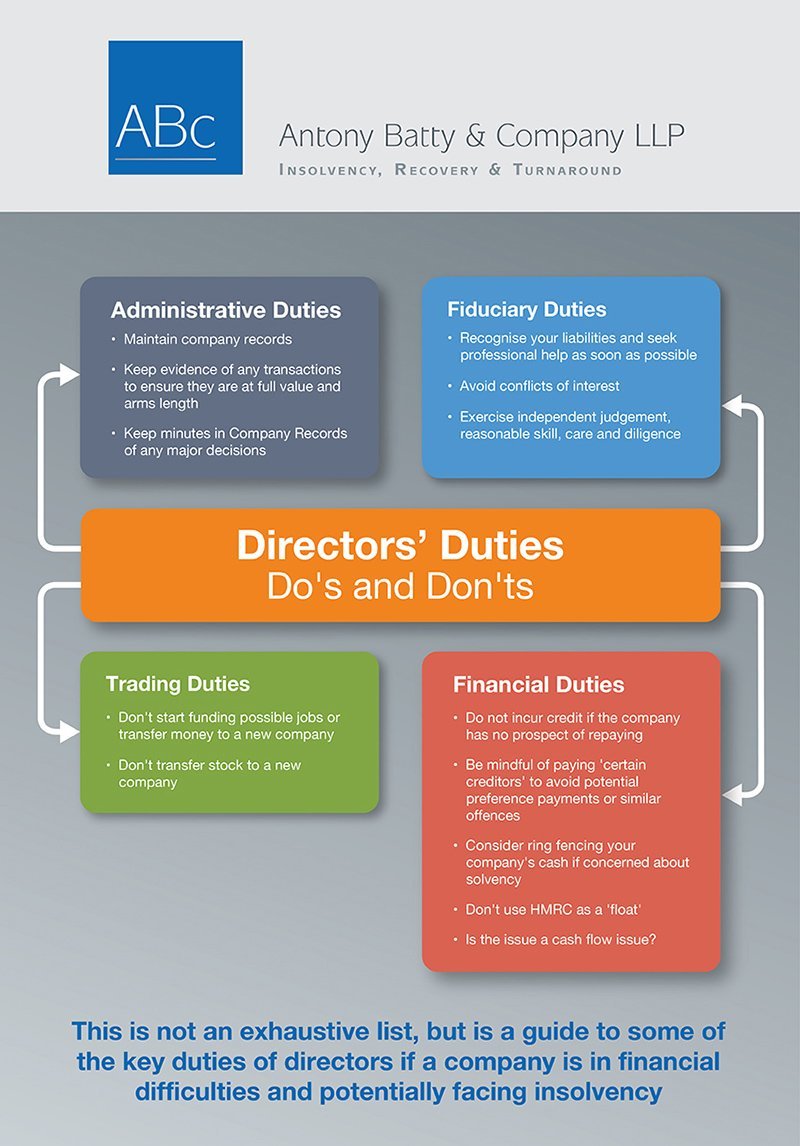 According to the Insolvency Service, 16,106 companies became insolvent in 2018, and when this happens an insolvency practitioner is normally appointed to look after the interests of the creditors, with the outcome usually being either a CVA, Administration or Liquidation. If the Insolvency Service finds evidence that the directors have not carried out their duties correctly, then they will launch an investigation, which can lead to director disqualification. There were 1,242 cases of director disqualification in 2018 many of which could have been avoided if the directors had performed their duties as set out in law. Director disqualification can result in a maximum ban of 15 years from being involved in the running of a company.

Company directors facing insolvency need to make a decision as to whether the company should stop trading, and if so, when to stop. At insolvency the duties of directors change, with the focus now becoming one of maintaining things as they are for the benefit of the company’s creditors and shareholders until the company’s future is determined. If there is a real risk that creditors will not be paid and Directors, knowing this, allow the company to continue to trade, they become open to claims of wrongful trading, which can lead to director disqualification and, quite possibly, personal liability.

It is well known that the courts place great reliance on Directors, when hearing the results of an investigation, who have consulted with their accountants or solicitors. This is even more the case when the directors under investigation have obtained professional, independent advice from a licensed Insolvency Practitioner.

How Can an Insolvency Practitioner Help?

Directors need to make the right decisions when facing insolvency, especially in relation to their duties as directors,  and these decisions need to be properly recorded. Here at Antony Batty & Company, our team of Licensed Insolvency Practitioners and Business Recovery and Restructuring Specialists can help Directors to ensure they fulfil their duties with practical measures and advice that can create a framework for managing a company in difficulty.

This advice can help to ensure that the Directors can avoid criticism at a later stage, if insolvency is the outcome, reducing the risk of a director disqualification investigation. Such advice can also be crucial in directors keeping control of the decision-making process, helping to prevent HMRC, banks, landlords or creditors influencing the outcome.

Contact us or call us on any of the numbers below for help and advice on insolvency and the possible issues regarding the duties and responsibilities of directors, including director disqualification. The initial discussion is FREE.

What can affected businesses do if Insolvency looms as a result? A Members’ Voluntary Liquidation is one option. Talk to us about how to withdraw your company monies in a tax efficient way via Business Asset Disposal Relief.